More Than Just Self Storage Solutions: Theatre and Shipping Containers

Image by BreeAnne Clowdus We’re delighted to see that shipping containers are enjoying a moment in the limelight as more than just self storage solutions. They’re cropping up in every imaginable form, from student housing to floating farms. If you visit Shoreditch in London, you’ll likely come across the Boxpark pop-up shopping centre, home to independent sellers and street food vendors. Our neighbours, The Lowry, are at it too, as they incorporated two shipping containers into the design of their Pier Eight restaurant, offering views of the Manchester ship canal. Pop-up restaurants and creative housing aside, shipping containers are also becoming commonplace in the theatre. They’re used for building materials, set pieces and as innovative locations for site-specific performances. In Korea, an entire theatre was constructed from 28 shipping containers, and across Russia, small towns were given their own low-budget cinemas, constructed entirely from shipping containers. Occasionally, the shipping containers are the entire focus of the production. In 2009, audience members battled with claustrophobia for a production of The Container, documenting the plight of refugees hoping to settle in Britain. Also in 2014, boundary-pushing theatre company, Shunt staged a production of The Boy Who Climbed Out of His Face on a jetty in Greenwich. The set was a shipping container, which could house 30 audience members at a time. Shipping containers have been used as set decoration in a number of productions, providing an industrial take on classics such as Sweeney Todd. Shipping containers were used to compartmentalise the drama, with a space for Todd’s infamous barber shop and Johanna’s dainty bedroom. Across the pond, a Georgia-based production of A Streetcar Named Desire moved the action from a bustling New Orleans street to a shipping container in a forest. The production was brought up to date with stark white interiors and contemporary costumes. 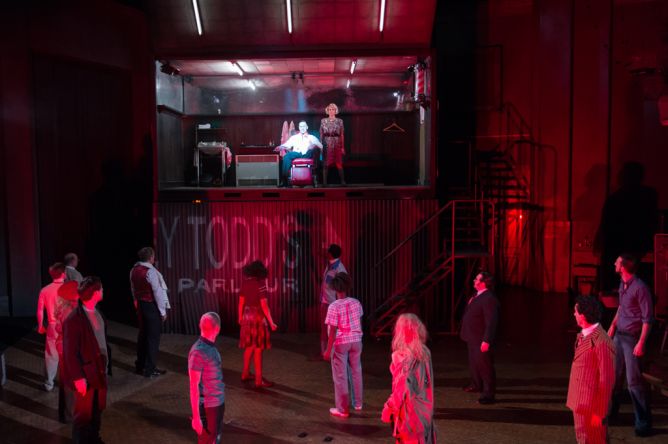 And finally, on occasion, the shipping container is repurposed as the entire set, with just enough space for 30 or so theatre-goers for an intimate experience. Local theatre company, Derelict took to Preston Flag Market recently with a single shipping container for a production of Séance, directed by David Rosenberg and Glen Neath and produced by Andrea Salazar. The 15-minute production took place in complete darkness, and in their own words: “We will not prey upon the paranoid, the bereaved, the credulous, the wide-eyed, the weak or the inbred – but in return we ask you proceed with an open-mind.” If you’re interested in taking in some site-specific theatre, you’ll be pleased to hear The Lowry has some incredible things cooking. Handle With Care is an immersive production by Chloe Moss that takes place at a self storage facility in Worsley. The play offers an intimate, fly on the wall experience as a young woman stores her possessions from 1988 to the present day. The production runs from Thursday 5th May to Sunday 8th May, and tickets are available for £10. We’re looking forward to seeing how this production makes use of the self storage environment!